Be a Beer Advocate

Beer is increasingly being seen as a key menu item; pairing beer with food has caught on with the "foodie" demographic, and the craft beer market is still exploding.  With the emergence of a beer sommelier (like a wine steward) as an upcoming trend to watch out for, beer brewing is attracting  attention that is well overdue.  Consumers have been inundated with wine information for decades, but now they are thirsting for beer knowledge.

Such as, beer slows the rate at which food leaves your stomach, which means it suppresses appetite.  So indulge in a beer, and know you're preventing overeating.  Beer contains fiber, which acts as a natural laxative.

Beer could keep bones strong.  Researchers at Tufts University found a positive link between beer or wine consumption and hip-bone density.  Heavy drinking, however, led to bone loss, according to the same study, so be conservative.

Beer is full of B vitamins from the yeast.  Unfiltered beer is especially high in B3, B6 and folic acid (B9).  B3 aids in cell repair and B6 eases PMS. Folic acid aids in colon cancer prevention.

So drink up, and stay healthy.
Posted by Kevin Bru at 8:24 PM No comments:

Home Brewing Equipment You Will Need


You don’t need a lot of fancy, and expensive, equipment to brew your first batch of beer.

Many brewing supply stores sell starter kits for $75 or less.  If you are interested in pursuing the hobby long term, a deluxe brewing kit can be found for less than $150.  A number of online stores will even ship the equipment and ingredients directly to your door.  It can cost even less if you borrow some or all the equipment from a friend.  Here’s a quick summary of what is needed:

A Large Pot – at least 3 gallons in size, though a larger one will generally result in fewer spills

Tubing & Clamps – to siphon and bottle the beer- A 6 foot section of 3/8 inch ID (inside diameter) food grade plastic tubing will work.  Clamps are available at your brew store

An Airtight Fermenting Bucket – a 5 gallon plastic bucket with lid, or a glass carboy (a big glass jar).  If you can afford it, purchase a glass carboy as they are easier to keep sanitized and don’t leak.  If you get a carboy you may need a large bottle brush to clean it

An Air Lock and Stopper – sized to fit your fermenter.

Bottles – You will need just over 2 cases of 12 oz bottles to bottle 5 gallons of beer.  Do not use the twist-off  bottles – always use high quality bottles that require a bottle opener.

Bottle Brush – While some experts overlook the importance of this, you will need a small brush to get your bottles clean. Do not depend on new bottles to be clean already.

A Bottle Capper – a hand driven device to cap your bottles also available from your homebrew store.

A Sanitizing solution – Beer is prone to infection, so everything must be sanitized before use.   Household bleach can be used, but it must be thoroughly rinsed to prevent contamination.  Your brew store may have alternatives such as iodophor and starsan.

As you can see, home brewing is not a task to be taken lightly. There is good amount of equipment that
have you running all over town to gather what you need to get started. That's why it is recommended that you purchase a good starter kit. Quality is very important in this endeavor.
Posted by Kevin Bru at 2:03 PM No comments:

These terms are universal in the world of home beer brewing. Many of them are German, the capitol of beer making, and appropriate pronunciations are given. Let's get statred:

Ale: A beer brewed from a top-fermenting yeast with a relatively short, warm fermentation.

Alpha Acid Units (AAU): A homebrewing measurement of Hops. Equal to the weight in ounces multiplied by the percent of Alpha Acids.

Attenuation: The degree of conversion of sugar to alcohol and CO2.

Beer: Any beverage made by fermenting malted barley and seasoning with Hops.

Cold Break: Proteins that coagulate and fall out of solution when the wort (see below) is rapidly cooled prior to "Pitching" the yeast.

Conditioning: An aspect of Secondary Fermentation in which the yeast refine the flavors of the final beer. The act if Conditioning continues in the bottle.

Hops: Hop is a plant, whoise vines are grown in cool climates, and brewers make use of their cone-like flowers. The dried cones are available in Pellets, Plugs, or whole.

Hot Break:  This is Proteins that coagulate (thicken) and fall out of the solution during the wort boil.

Gravity: Like density, gravity describes the concentration of malt sugar in the wort. The specific gravity of water is classes as 1.000 at 59 Degrees  Farenheight. Typical beer worts range from 1.035 to1.055 before fermentation (Original Gravity).

Krausen (kroy-zen) Used to refer to the foamy head that builds on top of the beer during fermentation. It is also an advanced method of priming.

Lager: A beer brewed from a bottom-fermenting yeast and given a long cool fermentation.

Pitching: Term for adding the yeast to the fermenter.

Primary Fermentation: The initial fermentation activity is marked by the evolution of carbon dioxide and the krausen. Most of the total attenuation occurs during this phase.

Priming: This is the method of adding a small amount of fermentable sugar prior to bottling, to give the beer its carbonation.

Racking: The careful siphoning of the beer away from the Trub. (see below)

Trub (trub or troob) The sediment at the bottom of the fermenter consisting of Hot and Cold Break material and dead yeast.

Wort (wart or wert) The malt-sugar solution that is boiled prior to fermentation.

Now every brewer will have their own terms for things, but with this list you'll be able
to hold your own in conversations with other brewers, and you suppliers.

Up next: Required Equipment
Posted by Kevin Bru at 5:44 PM No comments:

How To Brew Your First Beer

Home Beer Brewing is an Art.

This document was, and is, intended to be distributed freely and may be copied for personal use. Copyright © 1994 by John J. Palmer All Rights Reserved.

These instructions are designed for the first-time Brewer. What follows can be considered an annotated recipe for a fool-proof Ale beer. Why an Ale beer you ask? Because Ales are the simplest to brew.
Brewing Beer is simple and complicated, easy and hard. Compare it to fishing - Sit on the end of the dock with a can of worms and a cane pole and you will catch fish. Going after a specific kind of fish is when fishing gets complicated. Brewing the specific kind of beer you want is the same thing. There are many different styles of beer and many techniques to brew them.

Brewing a beer is a combination of several general processes. First is the mixing of ingredients and bringing the solution (wort) to a boil. Second is the cooling of the wort to the fermentation temperature. Next the wort is transferred to the fermenter and the yeast is added. After fermentation, the raw beer is siphoned off the yeast sediment and bottled with a little extra sugar to provide the carbonation. But there are three important things to keep in mind every time you brew: Cleanliness, Preparation and Good Record Keeping.

Cleanliness is the foremost concern of the brewer. After all, Fermentation is the manipulation of living organisms, the yeast. Providing good growing conditions for the yeast in the beer also provides good growing conditions for other micro-organisms, including bacteria. Cleanliness must be maintained throughout every stage of the brewing process.

Always keep good notes on what ingredients, amounts and times were used in the brewing process. The brewer needs to be able to repeat good batches and learn from poor ones.

Up Next: Brewing Terms
Posted by Kevin Bru at 1:06 PM No comments:


Welcome to Home Brewing: Whether as a hobby, obsession, way of life! Brewing beer is fun and easy so if you can make mac and cheese from a box without help, you can make beer, and we’re going to show you how. This section will provide you with all the necessary information for you to brew your first batch of beer from an extract recipe. This section does not intend to teach you all there is to know about brewing beer, but don’t worry, there is more to come.

To brew, ferment, bottle and condition a beer from an extract kit using basic equipment.
Posted by Kevin Bru at 12:19 PM No comments: 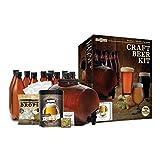